It’s been far too quiet on the blog lately, but with good reason…a very small man with large lungs has come to stay. Yup, our little lady now has a little brother to keep her company and our house has descended into chaos.  That said, it’s awesome and we’re so grateful for our gorgeous little people! What’s not awesome is how few new recipes i’ve been coming up with, but that’s changing right now with this deliciously summery and easy vegetarian lunch.  Roasted vine tomatoes and super tasty crispy quinoa, combine with lots of mediterranean flavours for a real treat.

I don’t know about you but in our house, fresh tomatoes don’t get a look in for most of the year. Sure, out of season some juicy tinned plum tomatoes are great, as are sunblush tomatoes in olive oil. But ice cold, rock hard and bland looking tomatoes that fill the supermarket aisles for most of the year can do one. I’d far rather wait for the real deal when summer’s here, they’re super ripe, juicy and a joy to eat. You can tell just by looking when the tomatoes are at their best.  The colour of them is usually much more intense, and a gentle prod should soon reveal if they’re ready, you want them slightly tender to touch.  Now that tomato season is here, it’s time to make the most of them.  Once you’ve got really ripe toms it’s hard to go wrong, but by roasting the tomatoes you just make everything more sticky and delicious.  Roasted vine tomatoes really are a thing of beauty. For this recipe, I sliced them fairly thickly (about 1cm), then baked the sliced tomatoes until most of the juices had gone and you were left with really soft and sticky toms. To make the salad more interesting, I added some colourful cherry and baby plum tomatoes too. Cherry tomatoes roasted are simply divine! All they needed was a crispy, crunchy texture on top to seal the deal. Enter, crispy quinoa.

Quinoa definitely seems to divide people, which is quite ironic considering how plain it is. I usually tend to use it in recipes for its nutritional benefits rather than its flavour. It’s brilliant to use if you’re after high protein vegan or veggie meals, and it’s also packed with fibre too. But for this recipe I tried cooking it in a different way. As we now live in a madhouse of toddlers and babies, I resorted to buying precooked red and white quinoa, rather than cook my own. You then simply spread it all out on a baking tray in one thin layer. Bake for 15-20 minutes in a hot oven, and out comes beautiful crispy, crunchy quinoa.  As well as adding a really lovely crisp texture to this summer salad, it also has a much nicer, nuttier flavour too. Perfect for sprinkling over roasted vine tomatoes, for a healthier crouton substitute (try it on this epic Caesar too!).

To finish this easy vegetarian lunch off nicely, I went big on the Mediterranean flavours. Once the baked tomatoes and crispy quinoa were done, I finished by tearing over black olives, as well as crumbling over some beautiful feta. Finally, as I like to do more and more these days, I scattered over plenty of fresh mint leaves and lots of delicious dill. One thing that I’ve not done this time but would really like to try, is using fire roasted tomatoes instead of baked sliced tomatoes. If you arrange the toms in a cast iron skillet, then pop them on a barbecue with the lid on to slowly blip away, the fire roasted tomatoes should have a lovely smokey flavour that would work well with all the other ingredients. If you’re doing a veggie bbq this summer, why not give it a try. If you do, I’d love to hear how you get on in the comments!

Get ahead – to make this easy veggie lunch even easier, cook the tomatoes and quinoa a day or two before. The toms will keep happily in the fridge for 2-3 days. Once fully cooled, the quinoa can be stored in an airtight container for a couple of days also. The quinoa tastes great at room temp, so just warm the toms up and it’s good to go. 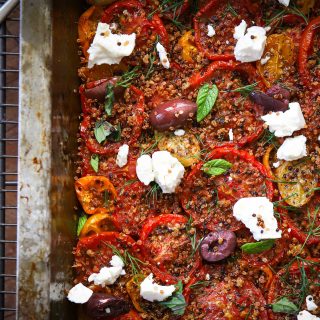